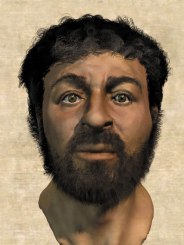 Christmas 2015 will never be forgotten in a hurry, not with the release of what is assumed to be the true face of our Lord Jesus Christ. The picture contrast greatly with the widely viewed and accepted image of the Son of the Most High painted by Michael Angelo, who created the most impacting image of Jesus Christ. Billions of humans around the world have grown up with a sub-conscious image of a handsome and good looking man name Jesus; whose photo adorns millions of edifices around the world.

Using forensic science, an image was built up using the human features of Jews of that period. In my book “If Jesus Was Me, What Would He Do?’ the image of Jesus was investigated and highlighted. This recent image of Jesus is in tune with the picture I saw of Jesus in one of my many visions of heaven. Though in the gospel of Jesus Christ, believers were not encouraged to use any image be it photographs, carved images or things in Heaven or beneath the earth for worship. For it is idolatry! Isaiah 53: 1-5, accurately describes the image of Jesus Christ of Nazareth in this manner; “For He shall grow up before Him as a tender plant, And as a root out of dry ground. He has no form or comeliness; And when we see Him, There is no beauty that we should desire Him. He is despised and rejected by men, A Man of sorrows and acquainted with grief. And we hid, as it were, our faces from Him; He was despised, and we did not esteem Him.” God made Jesus Christ to be an epitome of humility, comeliness – an ordinary person without specialized features (not an attention attractor!). So don’t be disappointed by the image that is released by modern science based on mathematical computation and analysis. It is the set time for true believers to worship God in spirit and in truth. What connects a believer with Jesus Christ, is faith in his name and the capacity of that name to pull down strongholds and destroy principalities. His image is not relevant in the connection purpose; the children of Israel suffered damning consequences, because they couldn’t connect by just believing in the name of Almighty God without seeing his face. That was what led them to create the golden calf as the image of God. The name of Jesus Christ has more power than his assumed image.

The only person God created with outstanding beauty and handsomeness was Lucifier, the arc-angel of worship and praise. Look at where it landed him because of self-pride and arrogance – in the pit of hell! God therefore made the physical appearance of Jesus Christ to be just ordinary according to man’s definition. What attracted people to Jesus was the glory of God upon him and his teachings, which overshadowed his comeliness. Look at Jesus Christ beyond this new scientific image of what could possibly be a true image, and see his name lifting you to high grounds.

A Messenger Of God For This Generation

Partner with my Evangelical Outreach To The Nations. Sow into the  God’s Kingdom Business. Partner at: www.phillipseteng.com/donate